Despite its dimensions, Levoit Core 200S Smart HEPA Air Purifier is packed with features including a long-lasting 3-stage HEPA air filter, WiFi connectivity, support for Amazon Alexa and Google Assistant, affordable price, etc. No wonder Levoit Core 200S is one of the most popular air purifiers in its class. 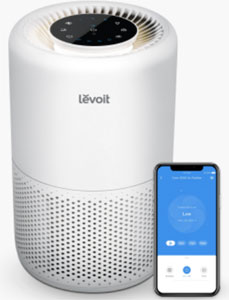 The unit is rated at 37W with a standby power consumption of less than 0.8W.

Levoit Core 200S air purifier features a 360° air intake and top clean air exhaust - it is recommended to position the unit at least 15" (38 cm) from walls and other objects that may interfere with the airflow.

When the unit is set to the maximum fan speed, its noise levels are at ~48 dB, which is still rather quiet.

When the unit is set to Sleep Mode, its noise levels are at ~24 dB, making the unit practically silent. 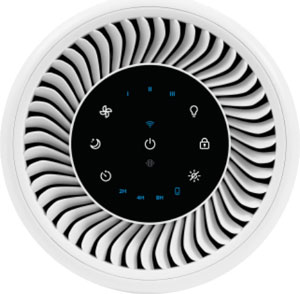 The control panel is at the top of the unit and features a simple set of controls, including:

- Timer control button with timer indicators, which allows the user to set the timer to 2h, 4h, and 8h, 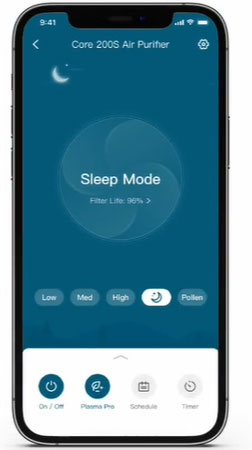 While many people prefer simple to use and maintain air purifiers (no WiFi and similar features), the use of the VeSync App to control and manage Levoit Core 200S is rather simple.

Levoit Core 200S air purification system is based on a 3-layer air filter consisting of: 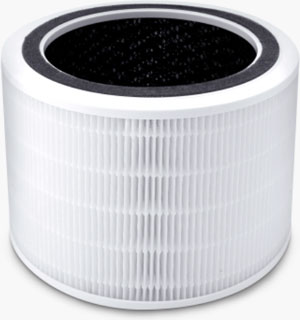 As one can see, Levoit Core 200S doesn't feature a UV lamp or anything similar and is practically 100% ozone-free true HEPA air purifier.

Levoit Core 200S is a very simple to use and maintain air purifier.

Note: when the unit arrives, be sure to read the User Manual in order to get accustomed to your new air purifier. Also, don't forget to remove a protective plastic package from the air filter.

The most important maintenance task is keeping the air filter in working order - the air filter is NOT washable, but the external air pre-filter should be vacuumed using a soft brush every 2-4 weeks.

Also, depending on the local air pollution and unit's use, the air filter should be replaced every 6-8 months.

Here are some of the most common Frequently Asked Questions about Levoit Core 200S air purifier:

Yes, Levoit air purifiers really work, however, one must be aware that an air purifier, no matter how good it is, can't purifier air in a small room with, for example, 20 smokers.

They do work, but they also have their limits.

How do I clean my Levoit Core 200S filter?

How long does a Levoit HEPA filter last?

Levoit HEPA filters may last for a long time, it all depends on the local air pollution and the use of the unit. For example, the air filter of the Levoit Core 200S can last up to 6-8 months.

Can HEPA filters be washed and reused?

No, the air filter of Levoit Core 200S cannot be washed and reused.

Where to place the Levoit air purifier?

Levoit Core 200S air purifier features a 360° air intake and must be placed at least 15 inches (~38 cm) away from the nearest obstacle for proper airflow.

Long Story Short: Levoit Core 200S is a rather compact, easy-to-use, and maintain true HEPA air purifier that comes at an affordable price. It is also a WiFi-enabled unit that supports the use of Amazon Alexa and Google Assistant.

However, there are also a few things that might be improved - the unit, for example, lacks Auto Mode and Air Quality sensor for indoor air quality reporting via Contol Panel and/or VeSync App. But, considering its price, Levoit Core 200S comes with a surprisingly long list of features.

Note: Amazon link opens in the new window, feel free to check it for the most up-to-date offers and prices.